Gas Cheap Now, But Not for Long

I saw gasoline for $1.69 per gallon for Regular (cash) yesterday on Route 1 in New Jersey. It has been a long time since we have seen gasoline that low and the relief to the consumer's wallet is a welcome one indeed. It is tantamount to a tax cut on the citizens or even a pay raise. The bottom line is that it gives people more money to spend on other important things and can even increase household savings rates and encourage on-the-road travel vacationing. The low price of oil and the resultant low price on gasoline and diesel fuel are boons to the economy in many ways.

So why are prices as low as they are? It's because of the extra oil on the market from U.S. oil production which has seen a boom in recent years, due in part to hydraulic fracturing and increased oil drilling on private lands.

But my point with this post is not to talk about why there is so much oil, or the benefits of fracking. There are many articles and blog posts addressing these issues. The point of this particular post is to throw a wet blanket on this low-price enthusiasm.

The price won't be low for long. And the past would be the indicator of future performance.

The message? Get it while it's hot, because very soon it's going to shoot back up to $3.50 per gallon and probably higher.

What are the causes of oil price movement? Supply, demand, political unrest and government regulation. Right now supply is greater than demand, so the price is lower. But there are so many political hotspots in the world today that any one of these tipping points that tips could cause oil futures to shoot back up to $120 per barrel.

As examples, Russia's designs on Ukraine and its trouble-making around the world have the potential for causing oil prices to rise, and this is a country that wants oil prices to rise back up because so much of their economy and budgetary income is based on the sale of oil and natural gas. So for Russia, instability on the world stage which causes higher fuel prices is exactly what they want and need.

Daesh or ISIS, is militant Islam rampaging through the Middle East and threatening terror everywhere else. They are currently in control of half of Syria and much of Iraq. It won't take much for that particular march of evil to cause an oil price spike. If they were to succeed in taking over Syria or Iraq, or cause mayhem in Saudi Arabia, Jordan or Israel, these are just some scenarios that would be catalysts for crisis leading to an oil price rise.

Al Qaeda, the original Islamic terrorist group is still a very real threat and actively trying to bring terror killings to the next horrific level. There is no restraint as to the kind of murder and destruction that they would like to perform and if they had a weapon of mass destruction they would have no hesitation in using it, as we have seen on 9/11 and in other events. Hamas and Hezbollah are the more localized but just as dangerous militant Islamists of the Middle East. Any of these groups could and would bring economic chaos that could result in sky-high oil prices.

Iran is a country that wants to see Israel and America (the great Satan) destroyed. It is progressing in its efforts to become a nuclear power with Russia's and North Korea's help. It could very soon succeed in its efforts to make a nuclear weapon. If that happens Israel may bomb Iran's nuclear facilities causing a regional war. This would spike oil prices.

The Taliban is still killing people in Afghanistan and Pakistan and seems intent on continuing to cause death and destabilization, also through the spread of terror.

The Communist-led, police-state of China always takes the side of the bad actors on the world stage as shown by its support of Iran, Venezuela, Cuba, North Korea, and Russia. And it is intent on destabilizing Taiwan, threatening the U.S. and Japan, and throwing its weight around the region and the world. And China never seems to lend its growing military might to world security threats that other civilized countries fight against. Their belligerent actions could be the cause of any number of scenarios that could cause an oil price spike.

Even if it isn't a national political action that causes the problem, it could be a crucial break in the supply chain, perhaps a few oil refineries going down, a natural disaster or a massive oil spill like the one in the Gulf of Mexico a few years ago. The anti-hydraulic fracturing movement could also put a political chokehold on oil derived from this process especially if countries regulate against the process as many individual states in the U.S. have done.

So, sorry to be a stick-in-the-mud, but enjoy the lower cost of gas for your car and fill up your fuel oil tank now because inevitably the low price we see now will soon disappear to be replaced again by the signs we are so used to. 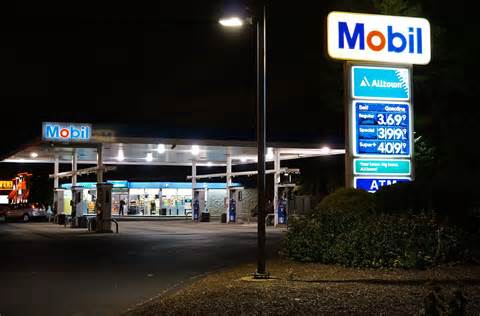