Earthquake in New York City Metropolitan Area and Beyond

Today New Jersey, New York, Virginia, and much of the eastern half of the U.S. and even Canada felt an unusually strong shaking of the earth that this region is not all that comfortable or familiar with. The earthquake's epicenter was near Mineral, Virginia and registered a 5.8 on the Richter scale. Most quakes in this region of the continent are usually much less noticeable than this one was.

I didn't time it, but the shaking seemed to go on for around thirty seconds or so. At my office, it wasn't strong enough to knock things down. But it was definitely a new experience for many of us. The quake only caused limited damage to some buildings near its epicenter in Virginia.

Office buildings in New York and New Jersey emptied themselves out as if they were all having simultaneous fire drills, including the one I work at in Parsippany, New Jersey. In our building, many of us remained inside, wanting to get back to work. But building security, showing an abundance of caution asked everyone to wait outside. After twenty or thirty minutes, we went back in. It was nice a nice break to get out in the summer sun for a little while and talk.

While this quake was disconcerting and worry inducing for parents and families, and even a little awe inspiring considering the power involved, we can be thankful that it was not worse than it was. Hopefully the involved faults have had their pressure relieved for another 50 years or so.
Posted by Brian Holmes No comments:

Email ThisBlogThis!Share to TwitterShare to FacebookShare to Pinterest
Labels: earthquake

Obama Administration Gives Administrative Amnesty to People in the U.S. Illegally, but Not Committing Other Crimes 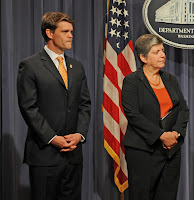 , and it is not something the director of the Department of Homeland Security or the Executive office should be engaging in - and especially not announcing it to the world. "Oh, we won't be enforcing these particular laws, so... you're good." The people behind this outrage are sworn to uphold the laws and Constitution

of the U.S. I state here and now that it's treacherous and treasonous, because it erodes the rule of law and the power of Congress

and the Constitution. It is plain circumvention to support a liberal

political intention. What they could not get through the legislative process last year, because it was unpopular, they have initiated by executive fiat.

Why can't the liberal numbskulls in this country get it through their heads that illegal is illegal? Why also do they insist on calling illegal aliens

Do we want laws that enforce the borders of our country or not? If it is OK for people to come to the United States and stay at will, then change the law to reflect that idea. But as it stands now the laws make it illegal for foreign nationals (aliens, as they are called to the left's annoyance) to come into this country without asking whether they may do so. What's wrong with that? And do you know why we don't make it legal for people to cross the border at will and stay here legally? Because the vast majority of Americans want border security

and additionally don't want to throw their tax dollars away supporting every down-on-their luck poor person that breaks into this country expecting to get rich. We just cannot afford it.

But this "rule change" from the Obama administration

is going to make coming here illegally MORE ATTRACTIVE to people outside this country, since it is now de facto okay for them to do so. There won't be consequences for being illegal. And the burden on the taxpaying citizens of this country will increase.

On top of not pursuing the illegal immigrants, they will be allowed to apply for work permits, which will allow them to compete legally for jobs with the 30 million Americans looking for work. Good news for job hunters

My suggestion to La Raza

, Robert Menendez(D) NJ, Janet Napolitano, and every other illegal alien supporter, if you don't want to break up families, then suggest they don't do something that's illegal in the first place. Don't rob a bank, don't commit tax fraud, don't commit document fraud, and don't break into a sovereign nation expecting that the citizens of that nation will look the other way.

.
Posted by Brian Holmes No comments:

Things are looking good in the Republican primary race for the 2012 presidential election. After an ornery second debate on Fox News last week, Governor Tim Pawlenty

has left the race and Governor Rick Perry

of Texas has entered it. Pawlently placed third in the Iowa straw poll, which Michele Bachmann

won by a small margin over Congressman Ron Paul

After an errant Tweet by a staffer, Governor Chris Christie

of New Jersey has once again reaffirmed that he is not going to enter the race, much to columnist Ann Coulter

remains cagey about her plans as far as running for president in 2012. To date, she has not denied or affirmed. But to all appearances she is certainly acting as if she could jump in at any moment.

is still threatening to throw his hat in for 2012, but I think he will be content with Governor Perry's candidacy and will choose to stay out. However, if Mr. Trump doesn't like the eventual primary choice, then don't rule out an independent run for president from Trump. And though he believes he would pull voters from Obama in the general election, he would also split the conservative vote. It would probably be a disaster for the Republicans and lead to Obama's reelection.

are both still in the race, and they are both great conservatives, but neither appears to have the traction that Bachmann, Romney, or Perry have. I believe they will be the next candidates out of the race along with Newt Gingrich

. Newt would be a smart and effective president and get the country's economy turned around, but he can't get conservatives to coalesce around him, much less the independents and Democrats he'd need for the general election.

. However, he does not appeal to the broad base of conservatives or Republicans due to his drastic foreign policy and social ideas. He will likely stay in the race as long as he can to take advantage of the extremely visible platform that his ideas have as a presidential candidate.

On the other hand, Michele Bachmann is looking strong after her Iowa straw poll win despite the mainstream media bias against her and continuous, baseless liberal attacks. She looks poised and espouses a consistent recipe for dealing with the country's economic woes, as do most of the Republican candidates.

's poll numbers took a big hit this week due to the entrance in the presidential race of Governor Rick Perry. While Romney would make a fine president who would handle the U.S.'s economic woes much better than President Obama

has, Governor Romney has some negative baggage that might make Perry more attractive to voters. We'll have to wait and see what kind of negatives come out on the Texas governor in the days ahead.

) with secret stealth technology to be viewed by the Chinese government, according to the New York Times. And U.S. intelligence officials even believe that the Pakistanis may have allowed the Chinese to take a sample of the downed chopper.
As can be expected, Pakistan denies letting anyone see the helicopter

and China denies any involvement. No surprise there. Pakistan and China are always denying things after sticking it to the U.S.
At the very least, it’s time we stop giving money that we don’t have to Pakistan. The U.S. gives that country billions of dollars a year and what we get is a haven for the Taliban

who operate against and kill our troops from bases in Pakistan. We get Osama living in a compound in Pakistan for at least six years. We get begrudging help in the fight against the Taliban, all from a country that is filled with Islamic extremists that hate the West.
Posted by Brian Holmes No comments: