Reasons to Vote for Trump for President in 2020


I'd like to talk today about President Trump's accomplishments and why I'm going to vote for him for president in 2020.

(1.) First of all, he has pushed for an improved trade deal with Canada and Mexico and he promised that he would get rid of NAFTA and replace it. He did that and signed the treaty between the three countries.

(2.) President Trump is addressing illegal immigration. Do you know that there are 20,000,000 people in this country who should not be here, who have come here illegally? Previous presidents have promised that they would build a wall on the border between Mexico and the United States and President Trump has actually started that. I think he said the other day that they are building 10 miles of wall a week on the border right now.

(3.) Supreme Court. President Trump has committed to appointing constitutional originalists to the Supreme Court and he has not disappointed in this respect.

(5.) President Trump has pushed for "right to try" concerning drugs that are still under testing. So, pharmaceutical companies develop drugs and there's a long process to develop them and get them to market and when something looks promising and someone with a disease wants to take it, now they can try it because of this legislation. The legislation protects the companies and government from litigation and gives the patient a possible cure or relief from their deadly disease.

(8.) President Trump has initiated a peace deal between Israel and the United Arab Emirates and Bahrain and he has even received a Nobel Peace Prize nomination for this work that he and his administration have done.

(9.) President Trump tried vigorously for a peace deal between North Korea and South Korea and North Korea and the U.S. and just because he hasn't succeeded yet doesn't mean he didn't try very hard, and because of what he's done so far I think the future looks bright for eventual peace between those two countries.

(10.) President Trump is the only president to stand against China's unfair trade policies against the U.S. His tariffs on China (which are in response to China's tariffs on U.S. goods) have caused China to make deals with the U.S., particularly in their increased purchase of our agricultural products. U.S. steel companies have also benefitted from Trump's actions.

(11.) President Trump fights climate change extremism and the climate change hoax. He stopped the economically disastrous Paris climate accord and has been a vocal critic of this climate change lie. Do you know that the United States has reduced its carbon output (as if it matters) where countries like China and India have increased theirs. We have among the cleanest air of any industrial nation (overall). Reminder forest fires are caused by lightning, electrical sparks, and humans with lighters; hurricanes are not caused by or made worse by carbon emissions, polar bear populations are not decreasing, ocean water levels have not inundated any major coastal cities. The ice caps have not disappeared. It is all hysteria.

(12.) President Trump has put resources towards defeating ISIS and he and the military in conjunction with their military partners did defeat ISIS and that is something that President Obama did not do.

(13.) President Trump pushed for and signed into law the tax reform bill lowering your taxes.

(14.) President Trump beefed up the military which had become weak under Obama, even while he reduces U.S. forces presence overseas. He also loves the military and he shows it.

(15.) President Trump talks straight like a normal person and not like a politician. It's very refreshing to hear the truth that comes out of this person, saying things that politicians have never said because they were worried about being reelected.

(16.) Trump loves the United States of America and he shows it.

(17.) President Trump loves law enforcement and believes in the rule of law and keeping all Americans safe.

(18.) President Trump respects the Second Amendment and the rest of the U.S. Constitution.

(21.) President Trump mobilized the government and corporations to quickly produce needed PPE and respirators in the wake of COVID-19.

(23.) President Trump convened an economic council of leading business and economic leaders to advise the administration on how to bring the U.S. economy out of the depressive effects of COVID-19.

These are just some of the reasons that I'm voting for President Trump and I hope you will too. If you want a president who keeps his promises, a president who's all about action, a president who loves this country, a president who is a patriot in the style of Ronald Reagan, then please vote Donald Trump on election day (in person if you can because paper ballots can be so easily voided by pollworkers and lost in the mail). It would also be great for the country if you would vote for Republicans for the House of Representatives and Republicans for Senate on Election Day so that the stonewalling that goes on in the House of Representatives will come to an end. Vote Donald Trump for president on Election Day. Thank you.

It's an Elephant's Job

Vote Republican in 2020 to get the United States' economy back on track. 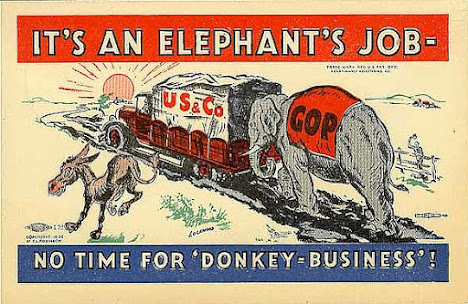