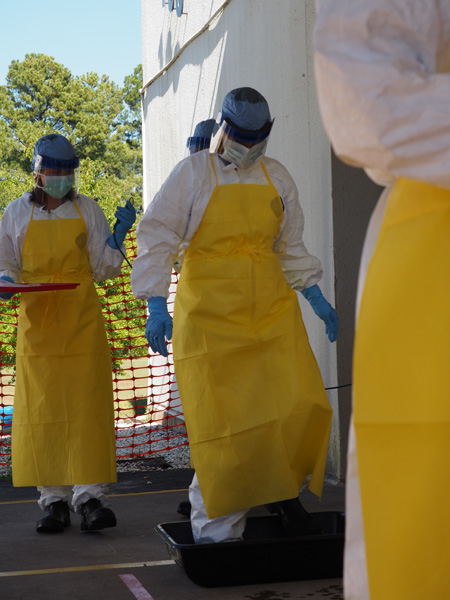 I sent out the tweet below to my followers on October 22 and it kind of went unnoticed, where I thought it would stir up some retweets or negative responses.


"There isn't much difference between not stopping terrorism & not stopping flights from Ebola countries. It's basically a way to ramp up fear"

It was the best I could do in 140 characters to express the thought, but in light of the latest imported Ebola case by a doctor in New York City, it needs expanding on.

Ebola is fatal in 25 to 60 percent of cases according to the charts at the link below from Dr. Ian Mackay. There are not too many diseases which spread person to person in which the outcome is as grim as this. And that's not to mention the incredible suffering the disease causes. The growth of this disease in the population where it takes hold is not linear but is exponential in the way that the flu blossoms in the fall and winter in cool climate countries. So while there are more deaths from HIV/AIDS, malaria, cancer and even the flu, Ebola has the potential to be an efficient, worldwide spreader of death. That's the cause of the enhanced fear people have of this disease. It is not blown out of proportion, because if it gets out of control here as it did in West Africa it would be many times worse.

As an aside, imagine if ISIS or al Qaeda decided to weaponize the Ebola virus. All they'd have to do is get someone or somemany infected and fly them on airlines to any country in the world. Even if it weren't as effective a weapon as a bomb initially, as a weapon of fear it is right up there with beheading and suicide bombing.

Maybe the way the disease has progressed in Sierra Leone and Liberia, where it has killed thousands of people since April of 2014, would not be the model for its progression if it gains a foothold in a country like the United States, but who is to say it won't be worse? It's in New York City now and the doctor who brought it back went bowling and rode the subway. Our only hope is that it is as hard to get the disease as the CDC and others tell us. But the evidence isn't reassuring.

Except for the blood of one doctor who received an experimental cure, there is no cure right now, and he can only give so much blood.

If health care workers who are generally careful and suited up against the disease can get the disease then it is only stating the obvious to say that it is easily transmitted.

Why does the Obama administration not do what common sense dictates vis-à-vis the Ebola crisis? That is, why are he and his administration resisting the banning of flights from West Africa when 27 some other nations have already done so and when it is apparent that our only reason for having these cases thus far is because we have imported them from West Africa. Every person that comes here, potentially harboring the virus, goes around interacting with hundreds of people, some of whom won't even know it. The stupidity of the administration's course of action here is staggering. The safety of the American people is the job of the president of the U.S., and Obama is apparently not fulfilling that function, rather he is endangering the citizens of this country, not to mention the world - that is until the world starts banning flights from the United States.

There should be a cordon around Liberia, Sierra Leone and Guinea and every country in the world should ban free flights in and out of West Africa, with only tightly controlled charter flights in and out. At the same time every effort should be made to help the people suffering there and to end the disease there where it "started". I don't know if President Obama wants the disease to terrorize America, but it sure seems like he wants America to participate in a coming epidemic - or at least not be separate from the problem. Nothing else makes sense. Any rational leader would have implemented the ban by now (and many have). And if Barack Obama is rational (as the Left likes to say he is), then he does not have the U.S.'s interest at heart with this policy and indeed the world's because his policy will cause the disease's spread around the world and not just here.

Additionally, I hope that the FBI, CIA and others are on watch for what radical Islamist affiliated nut-jobs may be planning regarding this virus, because they may turn away from axes, knives, guns and bombs and achieve their objectives through infection as well.

See the internationalsos.com website for some detailed charts on the Ebola numbers as they stand now.


Posted by Brian Holmes No comments: