Why Steve Lonegan for U.S. Senate? 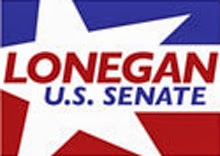 If change is going to take place in Washington D.C. and the U.S. Congress, someone should be elected to that Senate seat who is more than a rubber stamp for failed Obama administration policies. The strength of the minority party in the Senate will be buoyed by the election of Steve Lonegan making the Senate that much less likely to be an automatic cancellation of everything which the House of Representatives puts forward, and the body will also be less of a rubber stamp for Obama administration policies (though the Senate will still retain its Democrat majority for the time being).

Electing Cory Booker will continue the Congressional status quo of dysfunction, inaction and voter discontent with the U.S. Congress.

A Senator Lonegan will fight for reduced government spending, attacking wasteful government spending, finding solutions for the debt and deficits, and be a loud voice for lower taxes on overburdened citizens. He has shown himself as an effective leader in New Jersey and on national issues.

Please vote for Steve Lonegan for U.S. Senate on October 16 in New Jersey.

You can also Vote by Mail