2016: Obama's America is a well-made documentary exploring Obama's history, and which asks the following question "Who were Barack Obama's forefathers?" This is a question that was not answered to any degree before Barack Obama's election in 2008 (though there were those who tried to sound the call). Voters were so eager for "hope and change" and so eager to elect the first nonwhite president that they didn't look at or care about his radical background - a background steeped in Marxist, socialist, anticolonial, anticapitalist, anti-Israel, and anti-America ideologies. Some pundits say that the background and history of the candidate (or president) shouldn't be delved into like this. That it's unpatriotic. What?? A person's past and his background are predictors of his future actions. Not always of course, but more often than not for sure.

2016 then takes the viewer to Africa, the home of Obama's father, his forefathers, and much of his family. Here we learn story of Obama's visit to Kenya after the death of his father and we meet at least one of his relatives. D'Souza spoke to Obama's half brother George Obama, who wrote a book in 2010 despite having only finished the 7th grade. D'Souza asks George Obama if he thinks his brother Barack should help him in some way. George suggests pridefully that he is a grown man and can help himself. Incidentally, the two met in a park, so obviously George did not want to have his home on film, which Dinesh suggests is very small. My question is, the president's brother wrote a book and he still lives in a hut?

Indonesia was also visited by D'Souza and the film crew. Barack Obama (Barry Soetoro at the time) spent a portion of his childhood growing up there, going to a Muslim school as an Indonesian citizen, and according to the president's book, eating dog. Hawaii was also a backdrop for some of the film.

2016 uncovers, as much as any documentary can with this secretive person, the president's background and shows who his father and mother were, shows who his mentors and teachers were, and shows the company Barack Obama kept himself immersed in, all of which reveal that he is no garden-variety Democrat or liberal but rather that he has an extremely left-of-center philosophy founded upon anticolonialism, and anticapitalism.

The film points out that everything that President Obama is doing is purposeful and are not just bumbling attempts at doing what is right for the country. His spending and increases in debt are meant to weaken America's position in the world, the economic stimulus was meant to hobble the economy, and his giveaways to other countries are meant to spread the U.S. wealth.

The film also asks and attempts to answer another question, "If Obama wins a second term, where will we be in 2016?" According to the film and the experts that D'Souza speaks to, America will be further down the road to socialism, it will be further diminished as a world power, even to the point where it will be vulnerable and unable to deter wars anywhere in the world. The wealth of individual citizens will continue to decrease as well as the country's wealth on the whole.

David M. Walker, who served as United States Comptroller General, had some sobering things to say about the debt and deficit suggesting that we are fast heading down the road of Greece and Spain. When the debt is the same as the yearly GDP (Gross Domestic Product) or near it, I'd say he is right. (On a side note, I hope Mitt Romney appoints David Walker treasury secretary when he is elected.)

If you want to know more about Barack Obama, you will learn a lot about him from this documentary, much of which in fact is based upon Barack Obama's two autobiographies. D'Souza starts with facts he learns in those to build a foundation of knowledge about someone that he suggests is one of the most unknown people ever elected to the office of president.

2016: Obama's America is expanding its reach in theaters. Check for a theater near you.

D'Souza's book, Obama's America is an even more detailed look at the same subject matter and you can get it here: Obama's America: Unmaking the American Dream

This chart by Obama administration economists Jared Bernstein and Christina Romer was amended by James Pethokoukis of the American Enterprise Institute (AEI). It really shows the failure of the Obama administration's economic policies, especially the economic stimulus plan. 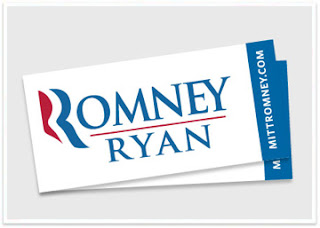 The choice yesterday by Governor Mitt Romney of conservative Congressman Paul Ryan as his vice-presidential candidate is a brilliant one and it's a winning ticket for the Republicans in 2012, not to mention everyone else. This choice shows that Mitt Romney is concerned about America's stagnant economy and will help to unleash businesses to grow. A successful businessman and a budget knowledgeable Washington politician are the right cure for what ails the flagging economy.

Did you know that Paul Ryan is just 42 years old but has been in Congress for more than 12 years? He is also chairman of the House Budget Committee.

Both of these men are for less government, something important to many Americans, including the Tea Party who will probably embrace the choice of Mr. Ryan. Less government and less ambition for what government should do will equal lower taxes for everyone, solidify America's credit rating again, and strengthen the economy. An unleashed business sector will increase revenues to the government, reducing borrowing and improving the U.S. debt and deficit positions. Salaries and job growth will rise because companies will be selling more products. The stock market will rise because companies will be doing better.

Additionally, both of these men care about smart healthcare reform and will work to repeal and/or neuter the costly and invasive Obamacare.

It is indeed time for America to come back. Romney and Ryan will lead this country toward a better 21st century and do it from the front, not from behind.
Posted by Brian Holmes No comments: