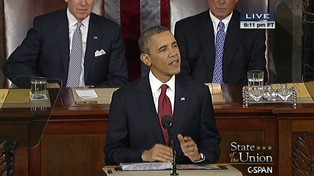 The political stump is where you can hear the real, unadulterated words of President Obama. You hear sound bites of them every day in the news. In the speeches that he gives when traveling the country while fundraising or pushing a particular issue, the president uses Republican bashing, wealth bashing, petulant, blame-everyone-but-himself, fudge-the-numbers, fudge-the-reality language and comes across as little more than a left-wing ideologue.

And then there's last night's State of the Union address. In the televised address to both houses of Congress, President Obama came across as someone who might be willing to cross the aisle to work with the other political party. He and his speechwriters tried to sound more moderate, more reasonable, and more pliable. He spoke well of America and its flag, he spoke well of the military and their successes against bin Laden and in Afghanistan and Iraq. He spoke of liberty and tyranny (!) and of intolerance for Iran's nuclear ambitions. He also spoke almost conservatively when speaking of unfair trade and piracy from countries like China.

But the president and his speechwriters are liberals and a liberal message can't help but pervade even this attempt at an aisle-crossing speech. He went on to say in the State of the Union address that our relationship with Israel is stronger. It is clearly not. His actions have distanced us from Israel and increased the threat against them from multiple enemies in the region. Egypt, Libya, the Palestinians, Hamas, Syria, Turkey, and Iran are all greater threats to Israel than ever. He said our ties with Europe and Asia are stronger. They are not. He said our ties with South and Central America are stronger. This is true, if the government is left-leaning, or socialist. It is not true of more democratic, or conservative states like Honduras or Colombia.

He said in his speech that our military will be stronger in the years to come, but 500 billion dollars in cuts, a smaller fighting force, and the smallest navy since 1947 counter this statement. All of this in the face of increasing threats around the world. Everything Barack Obama has done since entering office has been aimed at reducing the military's strength (not too mention increasing the size of the budget, and the debt).

In his State of the Union speech, the president (a Democrat) said that he believes what Republican Abraham Lincoln believed: That government should do for the people only what they cannot do better by themselves, and no more. However, his actions for the last three years show just the opposite. He wants government doing any and every thing that people could do better for themselves.

This president once again called for immigration reform so that illegal immigrants can enjoy the benefits of American citizens and not have the worry of being deported hanging over their heads. :`-( I ask again, what kind of country do we live in where our leader wants to sanction the illegal actions of millions of people? Against the will of the majority.

The 44th president also called (yet again) for a tax increase on millionaires. Nothing new there. He and his speech writers know what works with his base, I guess.

He continued on to say that he wants to develop more energy in the U.S. from all sources of energy and even suggested opening up more public lands to drilling. This would be great if it were true, but he has turned down the Keystone XL Pipeline from Canada which would have greatly helped reduce oil imports from the Middle East and has continuously been a thorn in the sides of oil companies that want to drill in the Gulf of Mexico or off the coasts. And despite his failed backing of solar energy company, Solyndra, he wants to double down on that type of investment.

My suggestion to those who listened to President Obama's 2012 State of the Union address (hopefully his last)--Forget everything you've heard, because it's the stump speeches where the truth (and more lies) comes out to play. As Rush Limbaugh likes to say, this is nothing more than a State of the Union Show.

Egg McMuffin is a registered trademark of McDonalds Corporation.
Posted by Brian Holmes