The Fires of Mayan Doom 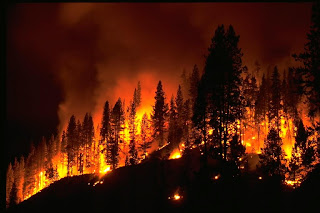 The following allegory is not about Mayans, global warming, or the destruction of trees, though the second two figure prominently in the story.

It is the year 2012. The Mayans with their calendar of doom have been proven right in a way that could never have been predicted. The Earth is now facing a catastrophe unrivalled in its history, which could indeed mean not only the end of civilization, but of life on Earth.

Unseen until it was too late, and unimagined by scientists, a large, rogue, gas giant planet passing through the solar system has wreaked havoc on the planetary system at large. Dubbed “Goliath” by astronomers, just one of the devastating effects engendered by Goliath is its disturbance of the usually tranquil asteroid belt. This has caused a shower of asteroids towards the inner solar system and out towards Jupiter. Earth’s moon has so far received the brunt of this violent asteroid shower in Earth’s neighborhood, but this fortune is by no means guaranteed to continue.

However, the worst effect of Goliath’s rampage through our solar system and the real crisis for Earth is that the passing gas giant planet caused just a slight change in Earth’s trajectory through space. This slight change dragged Earth off its usual course and resulted in a new orbit for humanity’s only home.

Where Earth’s average distance from the Sun had always been 93 million miles, its new average distance to the Sun is now 145 million miles – putting us 60 percent further away from our source of life sustaining heat. This orbit is very nearly where Mars had orbited the Sun until this earlier this year. Unfortunately for Mars, but lucky for Earth, Goliath passed by Mars close enough to eject it and its moon from the solar system forever, leaving plenty of space for Earth’s new path around the Sun. Consequently, Earth’s year has also become 200 days longer.

As the news gets out to the public, many of Earth’s scientists and leaders freak out, not to mention the public. Some of these policymakers paint the worst possible outcome for Earth’s future – the extinction of all life within a few years. Still other respected scientists paint a more moderate picture – a cooler planet, but still livable, due to the moderating effects of the world’s oceans and the planet’s latent interior heat. These moderate voices say that we can expect longer, harder winters, cool summers, and no more hot tropical areas on the planet. But life can go on and humankind can adjust, as it has during climate changes in its past.

To show the panicky public that something is being done, a disaster summit is convened including presidents, prime ministers, and scientists from all nations. Bold and radical ideas are presented in an effort to deal with humanity’s imminent extinction.

This is what the president of one nation said in an address at the World Disaster Summit of 2012 at the United Nations in New York City. “We must use global warming to save mankind and all other life on the Earth. If we get enough carbon dioxide into the atmosphere through the burning of fossil fuels, we can maintain the Earth’s average temperature and avoid this catastrophe.”

Another leader from a northern country, pounded his fist on the podium during his reply, “What about the pollution? My scientists say that there will be a 900 percent increase in lung cancer deaths from the increased hydrocarbon burning. And where is our oxygen for breathing going to come from? The increased burning of all these fossil fuels will use up a lot of the Earth’s oxygen as well.”

The other president responded, “Well, of course a few more people will die, but we’re talking about saving the planet here. Every struggle of humankind has involved sacrifice. As far as the oxygen goes, my scientists say that ocean vegetation produces more than enough oxygen to sustain life on the planet.”

At the month long summit, the arguments go back and forth like this, until finally, the global warmers win the day and plans are drawn up for all countries to drastically and immediately increase their carbon dioxide emissions. For the plan to work, each country is given a 30-day target to meet, and a 565-day target to meet (the length of Earth’s new orbital year).

Industrial and personal carbon emissions are to be increased. Energy-saving compact fluorescent light bulbs are banned, as are conservation, wind turbines, and solar power. More fossil fuel power plants are to be built, while nuclear power plants will be taken offline whenever possible. But according to computer models, these actions are not enough. At the Disaster Summit, it is decided that to get global warming really going, four strategically chosen countries, would each have to build (with the help of all nations) a mountain-sized bonfire within their borders. Canada, Brazil, Russia, and Congo were chosen for their distribution around the globe and for their proximity to what would be the bonfire’s main fuel source – wood.

Canada and Russia had no trouble getting their huge bonfires going. Satellite photos from space showed significant smoke and cloud formation as a result of the monster fires. At the start, the fires in Brazil and Congo are smaller than hoped for because of their wetter climates and weaker industrial capabilities.

The fires consume the trash of dozens of countries and anything else that can be burned. Ad hoc bonfires and forest fires are started in other countries as well. Recycling has ended. But the main fuel for the fires, trees, are disappearing at an incredible pace in an effort to keep Earth warm and stave off human extinction.

There are those leaders and scientists who say that we must burn all the available trees in the shortest amount of time to fend off the looming disaster. This will create the most CO2 the fastest, helping to retain more of the Earth’s invaluable heat. There are still others who say that we must be more prudent if we are to keep the fires going for a long time. “We must plant trees, and allow the trees to seed the ground naturally, replacing themselves. Done correctly,” one scientist said, “We can actually increase the number of trees on the planet and even mitigate some of the toxic effects of the fires.”

The global warmers scoff at this and argue that more trees would be counterproductive to the idea of increasing carbon output and they outlaw the idea of allowing regrowth of forests, despite the fact that the fuel that feeds their bonfires will soon be gone. “We need the carbon now. Earth needs the CO2 blanket now. We must burn all the trees as fast as we can. This is what the computer models tell us will save the planet.”

Thus, no action is taken to protect the remaining trees, except by rebellious individuals and organizations who illegally plant trees wherever they can get away with it. But the government pillage of the forests is too effective. At the pace that trees are being consumed by the fires, it is projected that they will all be gone by July 47th of 2013. UN projections, based on computer models, are that average world temperatures will be stabilized by that time.

However, despite all human activity to the contrary, the average world temperature is dropping by two degrees Celsius per extended month. No hurricanes have been generated through 2012, less tornados were spawned on the United States mainland, the aurora borealis has all but disappeared, and snow fell last week for the first time ever on the islands in the Caribbean. There have even been fewer reported earthquakes in 2012.

In the middle of 2013, when the Earth’s surface is completely denuded of trees, the fuel for continuing the greenhouse gas bonfires (and the main source for building homes) will largely be gone, perhaps forever. The Earth will never be the same. But the gamble is that the atmosphere will at that time have sufficient greenhouse gases in it and enough of a permanent cloud cover to keep the Earth warm enough to support life indefinitely.

At least that’s what the computer models say.