The following is a sobering article by Ann Coulter regarding the crazy Norway murderer and the news coverage about him. Apparently facts are fruits that The New York Times and other mainstream media outlets can pick and choose from, like they're at the fruit market.
New York Times Reader Kills Dozens in Norway - HUMAN EVENTS
Posted by Brian Holmes No comments:

The following is a beautiful night-time, time-lapse video of the Australian night sky including the Milky Way Galaxy. It is so stunning that it almost doesn't look real. Watch for sporadic shooting stars! (hat tips to the Blaze via Wired)


Ocean Sky from Alex Cherney on Vimeo.
Posted by Brian Holmes No comments:

By Blade and By Bullet They Died -- A Revolutionary War Poem 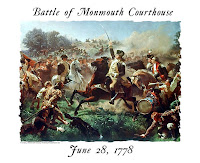 Before the day that blood was shed,
the Revolution was plied with words said
by pen, by press, and by speech.
King George then had little to dread.
The words were easy to speak, and though noble,
earned no badge of courage.
With the king we had yet to see trouble.
But tyranny does not sit forever idle
when want of freedom rises like a tide --
nor yet does courage stay in the middle.
Tyranny’s fist clenches
A king’s ears and eyes become wide
Men are sent to Prison,  to Death,
Mowed down in the street.
And with that tyranny we collide.
By blade and by bullet men died.
Patriots pledge
to country, to neighbor, against the other side.
Courage blooms in the fight for the noble cause
because life is dear
and death men do fear.
Yet for the freedom of men and women,
and sons and daughters here
from a distant tyrant, or near
From the rule of an oppressive king,
Men and women will ride with bravery --
do battle to choose their destinies.
Many by blade and by bullet they died
Who sought a free country
for they and their families, some toiled and some cried
with courage their only guide,
But by blade and by bullet, they too often died.
copyright (C) Brian M.Holmes
Posted by Brian Holmes 2 comments: