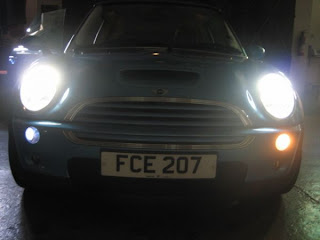 I just don't understand it! Why do certain drivers insist on driving at dusk or at night without their headlights on? Are they trying to save gas or money? Are they trying to save the environment? Are they attempting to be stealthy for some wacky reason? Or are they just mentally out of it?
Whatever the reason, it is certainly misguided thinking. This is a safety issue. That's the bottom line here. Other people cannot see these vehicles, or can't see them until it's too late. My daughter is a new driver on the roads. I don't want her crashing into a car she didn't see. And she is not the only new driver, there are thousands of new drivers on the roads. Driving dark isn't just dangerous to my daughter or other new drivers. It's dangerous to everyone.

I saw a car drive by a police car in Colts Neck, New Jersey this week with its headlights off and there was very little light in the sky, if any. The cop just sat there and let him/her go by. Today it was raining cats and dogs and nearly pitch dark, and a white SUV , nearly invisible against a backdrop of white snow, rain and darkness went by going the other direction. The car in front of me flashed him, I flashed him, the guy behind me flashed him. He/she kept driving dark. "Oh, I have a white car, so I don't need to turn on my lights." It's exactly times like that that I wish I was a policeman, because I would slap a ticket on that Bozo or Bozette faster than they could say "But I'm saving energy!"

I don't get it, really I don't. This stupid practice endangers other drivers' lives. And a lot of people seem to do it because I see it nearly every day.

Let me just get this out there so dark driver dummies can think about it. The amount of gasoline you save by not using your headlights for 15 or 30 extra minutes is insignificant. In fact leaving your headlights on all day while you drive makes NO statistically noticeable difference in gas mileage in your car or truck. None. Look it up. Better yet I have done it for you!

Stop endangering people's lives! Why do you think the police are supposed to give tickets for driving without your lights on when it's dark? Because it endangers everyone else. Just because you can still see where you're going isn't the issue! Oh, and driving with parking/running lights on in the dark is just as dangerous because with everyone else using headlights, the weaker looking running lights get lost, and washed out by the brighter lights around them.

Please be a safer driver. Drive with your headlights on in the rain, or anytime the sky is darker, such as dusk, nighttime, and heavily overcast days.
Posted by Brian Holmes No comments:

Email ThisBlogThis!Share to TwitterShare to FacebookShare to Pinterest
Labels: headlights

There is more than one word that's used in politics and the media coverage of politics that's used just for pure demonization. Political buzz words, if you will. Politicians look at polls and see who the public doesn't like, then they patronize the public by expressing their antipathy toward that group. The news media does it too. Slip and Fall Lawyers, Used Car Dealers, CEOs, Bankers, Fund Managers, Lobbyists, and Special Interests are all persona non grata at the politician's public dinner parties. If I hear Barack Obama or another liberal Democrat say "lobbyist" or "special interest" again I think I will jump into one of the six foot snow drifts outside my window!

Let’s narrow our focus for the moment on lobbyists. The definition of “lobbyist” according to Merriam Webster's Collegiate Tenth edition dictionary is: To promote or secure the passage of legislation by influencing public officials.

Like it or not, lobbyists are part of the political landscape in America. These people don't go to Washington DC, or your state capital to lobby in the interest of lobbyists or for their own personal interests, they go representing the interests of sometimes huge swaths of the population of the United States.

For instance AARP lobbies Washington and represents some 40 million older Americans. The National Rifle Association (NRA) represents 4 million gun owners, and Labor Unions lobby in Washington DC and the state capitals for their workers. AAA has lobbyists, as do manufacturers, mining consortiums,  restaurant associations, handicapped people, and even illegal aliens have lobbyists! The list is actually endless of government lobbyists in this country, and it is not just Banks, Wall Street, Pharmaceutical companies, Big Oil, and Health Insurance, as some politicians and reporters would have you believe. There is a lobbyist for almost every type of American trying to get something from the government or prevent something being done by the government.

Everyone is (or can be) represented, maybe not equally, but lobbying is democratic and there is nothing keeping one lobby from being as powerful as another.

So when President Obama rails against lobbyists, he disparagingly uses the term lobbyist as a scapegoat, or a euphemism for whole populations of people in this country whom he does not want to name by name because it would hurt him politically. Some lobbyists may deserve to be painted with the broad brush he and other politicians paint them with, but most are in their state capitals and Washington DC to represent the legitimate issues of the groups who sent them there.

There are always going to be people who go to Washington DC, or Lansing, or Trenton, or Tallahassee and try to get senators, representatives, governors and presidents to hear their side of the story. Demonizing constituencies and those working on their behalf is disingenuous, cheap, political pandering.