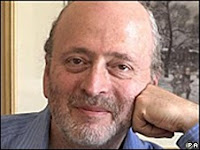 Eric Woolfson, the signature voice of the Alan Parsons Project died Wednesday of cancer at the age of 64. The singer, who crooned many of the greatest hits of the progressive rock band was also a playwright, composer, musician, and politician in his native England. He also recently released a solo album.

Woolfson will be most remembered as the lead singer of some of the Alan Parsons Project's best songs including Eye in the Sky, Time (Keeps Flowing), and Don't Answer Me. One of the best songs he sang was Ammonia Avenue. In it he really has the chance to show the talent and full range of his beautiful voice.

It has been said that Alan Parsons used Woolfson's voice like an instrument in his compositions and I'd have to agree. If Mr. Woolfson was akin to any instrument, I have always thought him to be close to a French horn due to his mellifluous, brassy voice.

Time will keep flowing on in Eric Woolfson's absence, but the world will be a little poorer because of it, and the choirs in Heaven perhaps a little richer. He leaves behind a wife and two daughters. See ya some other place, somewhere, some other time Eric. (photo credit BBC)
Posted by Brian Holmes 1 comment: