A Horrific Persistance of Incorrectness - Grammar 101 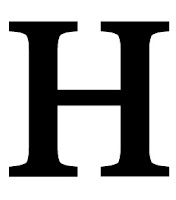 There are some grammatical issues that inexplicably persist in popular culture, perpetuated by even the most learned among us (or apparently learned). The one I address here today is actually a simple, straightforward grammatical rule. It concerns the confusion which sometimes seems to arise when trying to figure out which indefinite article to use in front of certain words starting with the letter H.

"An" certainly sounds more Ivy League when used in front of certain words. But "sounding" knowledgeable is a stone's throw away from disinformation.

Most words in the English language that have H as their first letter also have the hard H, or consonant sound. Think Hit, Happy, Hair, Humidor, House, Hot, Hog, and History to name a few. Which article do you use in front of these H words? The answer of course is "A". ("I had a history test.")

A relative small number of words begin with an H that has a silent H, or vowel sound. Think Hour, Honor, or Honest. Which article do you use in front of these H words? The answer in these cases is "An". ("American Idol is an hour long today.")

It is always wrong to use the word "an" before any word beginning with a "hard" H. This includes the word "Historical". Let me repeat, the word "History" and its derivations begin with a consonant sound and so are preceded by the article "a" -- never "an".

It's not a hard rule. But it is a hard and fast rule.

Refer to the Chicago Manual of Style 15th edition for help with this and other grammatical astigmatisms.