If you're up for a funny movie (and who isn't these days?) then Couples Retreat with Vince Vaughn, Jason Bateman and many other great and talented actors is for you. It's a light-hearted look at problem resolution in marital relationships. It doesn't offer real solutions, but it does offer real laughs. The movie is set in the Caribbean and centers around four couples who go to an all-inclusive resort that promises to help them work out their problems. The humor is sometimes raunchy and always wacky. (The movie is rated PG-13, but I rate it PG-16 for simulated sexual activity and references.)

I love this movie and am definitely going to add the DVD to my collection when it comes out. Grab a friend or significant other and see this fun romp in the sun and sand.
Posted by Brian Holmes No comments:

Unearned Peace Prize Is Nothing New 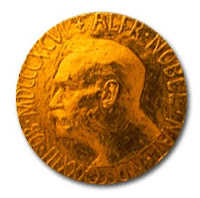 Today the Nobel Prize committee has shown itself and its Peace Prize officially to be without value or significance. Not that we haven't seen many past poor selections already. At least when this liberal organization gave former President Carter his unearned Nobel Peace Prize, he had been out of his failed presidency a few years and had done something. But for this organization to hand a Nobel Prize to someone who hasn't done anything yet, except talk a good game, is a joke.

The Nobel Peace Prize is a continuous year after year joke. Just look at some of the past recipients: The International Council on Climate Change and Al Gore (for Peace?), Jimmy Carter, the UN and Kofi Annan, Yasser Arafat; and Mikail Gorbachev of the Soviet Union for helping to bring down his own country.

Someone who is humble and who recognizes that he has not accomplished anything in his presidency yet would decline this award. But President Obama is the opposite of humble.

The Nobel Prize Committee should be raked over the coals for its blatant attempt to influence world politics.
Posted by Brian Holmes No comments:

How to Reduce Your Carbon Footprint

There is an easy way for the concerned eco-citizens of our much-beleaguered world to reduce their carbon footprints.

What's a carbon footprint you ask? For those of you who may not know it, a carbon footprint is how much carbon you unwittingly spew back into Mother Earth's bosom by virtue of your everyday existence. It is measured for individuals, industries, and countries in tons of carbon emitted to the atmosphere each year. Natural sources are of course not considered.

Carbon trading, Cap and Trade, or Cap and Tax, is a scheme where if a business produces less carbon dioxide emissions than it is allowed, it can sell what remains to some company that knows it is going to produce too much carbon dioxide. These carbon credits will be traded on Wall Street, which will give them hundreds of billions of dollars worth of new business, so they are literally salivating at the prospect that The American Clean Energy and Security Act of 2009 will pass. It has in fact passed the House of Representatives but is idle in the Senate.

Beyond the higher prices everyone will pay for energy as a result of the Carbon Tax, we the little people need to get in on carbon trading too. And I know how to do it, without a broker, without fees, without license, and for free too. Yes, you too can acquire carbon credits and thereby control the size and impact of your odious carbon footprint.

The process is a little involved and requires some work, but you're doing this for Mother Earth so a little work ain't gonna slow you down from doing right, is it? This Personal Carbon Footprint Reduction Plan (PCFRiP as I call it) is also built on fairness, honor, and respect.

The plan goes like this. Choose a newspaper, a local one in your area would be best for this. If there aren't any newspapers left in your area then choose on online newspaper, but whichever paper you choose it should have an obituary section. Open said newspaper or website and go to the obituary section and look for a recently deceased person with the same last name that you have. If you have a common name like Smith or Patel you may find many. If you have a less common name like Frankenstein you may have a harder time. It may take days or weeks of hard work but you are doing this for all the right reasons people (to prop up failing newspapers and reduce that carbon thingy).

Brilliant right? There's no downside. I have acquired the Carbon Credit History of seven decedents with my last name and now have the ability to add 152 tons of carbon to the atmosphere guilt-free, without increasing the total atmospheric load by one net pound.

I haven't been able to take advantage of all this extra emissions capability yet, but it's there when I need it and if anyone has an unusual last name or is in a hurry to offset their carbon usage, they are free to contact me to purchase some of my excess Carbon Credit History. So now the average guy or gal won't be left out of the Carbon Trading boon that is now upon us. We can all be green and expend a little energy too.

And to address the point ever so briefly, would you expect the world's largest and most productive economy to use less energy than say, Indonesia and remain a strong and productive country? I think perhaps a personal boycott of BP is the order of the day. We can use 26 percent of ExxonMobil's energy just as well.)

Next week find out how to acquire property on the moon without paying a radio shill!
Posted by Brian Holmes No comments: