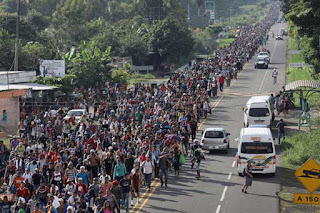 Central American Caravan of Migrants 2018
Coming soon to a border near you.
Posted by Brian Holmes No comments:

The Supreme Court of the United States needs to step out and say that impeaching a former president (a private citizen) is unconstitutional and put a stop to this constitutional erosion that is taking place. It is their constitutional duty to do this. Additionally, betrayer Mitch McConnell and every other Senator (of any party) should also know that it is unconstitutional and should say so if they care about the U.S. Constitution which they took an oath to preserve and protect.
Unfortunately, the swamp is pervasive in D.C., and the actors there don't mind eroding the Constitution if it can hurt President Trump.
Posted by Brian Holmes No comments:

The following is a list of corporations who have de-platformed President Trump and many other conservatives or Trump's supporters. Many of these companies have said they won't support candidates who questioned the fraudulent election results. HSBC has stated that you may be debanked if you don't wear a mask in their bank. Remember these companies when you are about to make a purchase and choose a nonbiased company when possible. You and I can grow this list together! Please help by commenting below with the names of other Companies who have shown their political liberalism and/or their intolerance of free speech and liberty.
AirBnB
Amazon
American Express
Apple
Bank of America
Banks United
Bed, Bath & Beyond
Blue Cross Blue Shield
Comcast
Deutsche Bank
Facebook
GoDaddy
Google
Hallmark
HSBC
Instagram
Kohls
Loews Hotels
Mailchimp
Marriott
MasterCard
Morgan Stanley
PGA
Professional Bank
Reddit
Signature Bank
Simon & Schuster
Snapchat
Spotify
Stripe
Square
Twitter
WhatsApp
YouTube
Updated 1/22/2021
Posted by Brian Holmes No comments:

The following is a list of Republicans who did not side with President Trump for election integrity or who have subsequent to January 6 "stabbed" President Trump in the back. Remember these names when the next election for them arrives or they ask you to buy their book or watch their movie. They will not be welcome in the new Patriot Party (should there be one). You and I can grow this list together! Please help by commenting below with the names of other Republicans who have undercut President Trump and give a source for their betrayal (words or deed) and we will add them to this list. Thanks!

Senator Hawley, Montana, Senator Hyde-Smith, Missouri, Senator Kennedy, Louisiana, Senator Tuberville, Alabama, Senator Cruz, Texas, and Senator Marshall, Kansas were the only United States senators willing to object to the electors from Arizona on January 6, 2021, even though those electors were certified by Arizona based on fraudulent votes. Every other Republican U.S. senator stabbed President Trump in the back and squashed election integrity. Senator Lummis, Wyoming was added to the vote on Pennsylvania electors.

A big thanks to these senators for fighting for election integrity. You will be welcome in the Patriot Party. 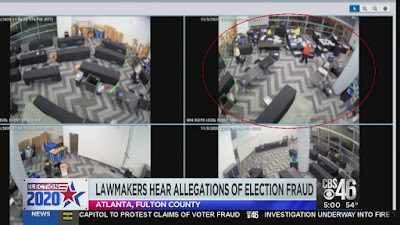 There has been a concerted effort to ignore the election fraud of the 2020 election by Republicans (most of them) and of course by Democrats (who benefited from or performed the fraud) and the news media. It seems that the entire government (except for some brave individuals) is set on ignoring the election fraud, either to be rid of President Trump or to begin initiating the socialist agenda, global warming agenda, and great reset agenda. There appears to be no interest by Washington DC politicians in ensuring the integrity of elections in the United States. That being said, many many millions, perhaps 80 million people will not have faith in the vote going forward. That leaves patriots with few options.

1. Don't vote. This would result in increased oppression for conservatives and patriots. But voting is compromised.

2. Continue to vote Republican as if nothing happened for more of the same. Any Republican who did not vote to object to the fraudulent electors should be voted out of office, no matter how good they are on other issues (that is when we can trust the vote again).

3. Create a Patriot party. This is not a quick fix but certainly satisfying.

4. Actually have an insurrection. (Not recommending this, just saying it is an option. It is not even a good option because it doesn't address the root cause of the problem. It is also not a love thy neighbor-type option.)

5. Leverage as much real estate of the Constitution as it can provide to crowbar fixes to the recent lawlessness of the Left. (lawsuits, impeachments, recalls, etc.)

6. Once some justice has been issued and unconstitutional laws and activity addressed, conservatives need to take back education in the United States because this is where the tide of liberalism/socialism/marxism is coming from today.

Bitcoin Moons Based on Solid Fundamentals

Bitcoin currently sits at about $39,666 (for one Bitcoin) at 12:30 pm EST on January 7, 2020. The all-time highs are happening every day (even every hour) recently. None of the crypto prognosticators predicted so much moon so fast. I do believe that the present bull-run for Bitcoin is supported by fundamentals which are

However, most other cryptocurrencies which have seen a rise on Bitcoin's coat-tails as well do not have the same fundamentals supporting them and if one wants to apply the labels of "irrational exuberance" or "bubble" to them, the labels would be more appropriate than to Bitcoin. Actually some of the larger market cap altcoins like Ethereum, Bitcoin Cash and one or two others have some institutional investment in them as well, so their gains may be sustainable and credible, but if you're seeing lower market cap coins making huge gains, sell on the highs because those altcoins are less likely to hold any recent gains because there aren't any supporting fundamentals, in most cases, to justify large price gains. (Of course you should keep/hold any coin which you believe in, I'm just saying for investment purposes most altcoins will not keep up with the Bitcoin price increases.)

Bitcoin always has price pullbacks and that should be expected, but the trend is always going to be up until we get closer to the last minted/mined Bitcoin in the 2100s.

Check out: The Essential Guide to Bitcoin Mining: A Cryptocurrency Tutorial