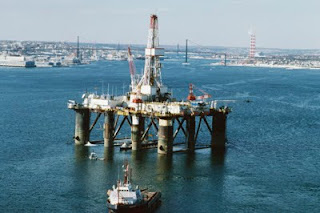 Ending offshore drilling is not the solution to ending future oil spills. That's like using a gun to get rid of a cancerous mole. Sure, the mole is gone, but the health of the patient is decidedly worse.

The Gulf of Mexico is the source of 25 percent of the United States' domestic oil used and 15 percent of the natural gas. If we were to stop oil drilling and “focus” on clean energy we would be buying that 25% more ($4.00 + per gallon) oil from foreign sources who will be more than happy to drill offshore in the Gulf of Mexico where there is plenty of international water not controlled by the United States of America.

The U.S. and other countries have been getting oil from the Gulf of Mexico for decades, pretty much without incident. Obama said as much himself in his press conference Thursday. There are 720 oil rigs out there now, which have provided billions of gallons of oil over the years, all while NOT causing disastrous oil spills. But accidents DO happen in almost every endeavor of human life. We take chances to get the things we need. We take chances to do the things we need to do.

Of course, contingency plans need to be in place in case disastors like this happen. British Petroleum is culpable here, but the federal government is responsible too for ensuring that such plans exist and are ready to be acted upon, whether by the federal government or the oil company. There is plenty of blame to go around, and the Obama administration's underwhelming response to this disaster is as criminal an act as BP's lack of ability to stop it. They have let the situation get out of control and endanger the livelihoods of thousands of people, and the ecosystems along thousands of miles of shoreline.

What we DO need to do is not force oil companies to have to drill in mile deep water if it is easier to get in shallower water.

But because environmental extremists have the ear of liberal democrats throughout the country we can't expect clear thinking to prevail on oil drilling at least until Republicans retake one of the houses of Congress.

Until then, oil prices will rise, the amount of money we give to third world regimes will increase, and our economy will be hobbled by higher energy costs.
Posted by Brian Holmes No comments:

Iron Man, of Marvel comics fame, is a cool super hero. His weapons and abilities are cool. His mask is cool. Even his colors are cool. He's an almost perfect super hero. Except when he's drunk. Just check your smell-tester at the theater door of the latest Iron Man movie. Well, if you're going to a movie in this genre, you probably know that ahead of time.

Iron Man 2 is a fun, gripping 2 hours and 15 minutes. It's a super hero movie, so it follows a certain formula, but it is one of the better of the genre thanks to Robert Downey Jr., and a crazy Mickey Rourke who shines in this film as a Russian mad scientist villain. Throw in Samuel L. Jackson and Don Cheadle and Iron Man 2 rocks. Iron Man 2's well-done special effects also lend excitement and reality to the movie. The fight scenes and the "comic book" technology are awesome.

I'd never cared too much for Mickey Rourke, but I liked the way he portrayed his character, Ivan Vanko, in this film, Whiplash -- a great villain, and well acted by Rourke.

Gwyneth Paltrow's role could have been played by any actress and she really didn't stand out as Pepper Potts, Iron Man's executive assistant, CEO, and "love interest?"

Sam Rockwell who played Howard Stark's business nemesis seemed to me to be miscast as well. The role needed someone with more screen presence. However, it didn't detract from the movie on the whole.

I would definitely see this again and will buy the Blu-Ray disc or DVD when it comes out. Go see it.